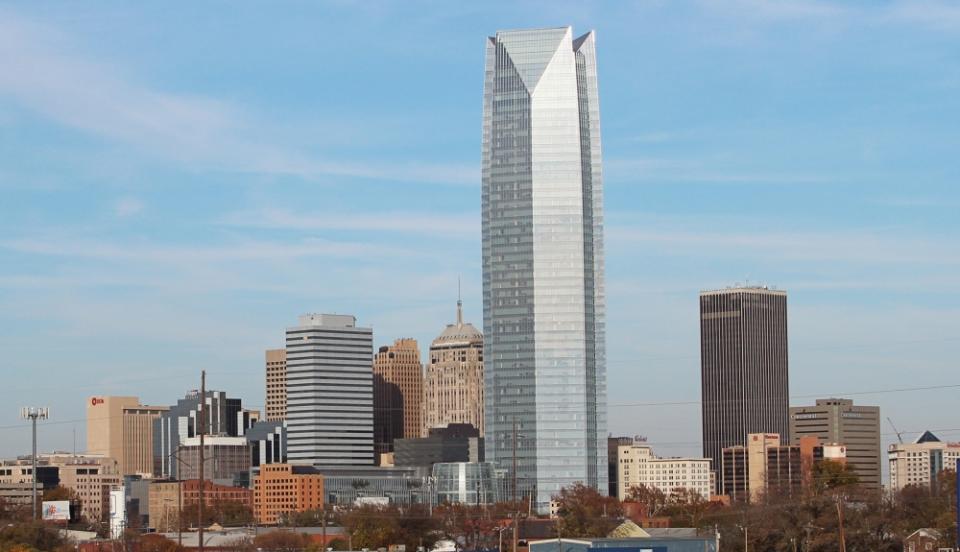 The 1st Quarter of 2017 will probably turn out to be an anomaly for the Oklahoma City Office Market. Driven by the sale of the First National Center containing almost one million square feet, and the sale of several other buildings in excess of 25,000 square feet, the quarter came within a little over 100,000 square feet of equaling all 4 quarters of 2016. Total sales for the quarter were 1,655,620 square feet compared to 1,786,626 for all of 2016. However, the prices for the 1st Quarter of 2017 could not stand up to any quarter in 2016. The difference is again attributed to the sale of First National Center and the sale of several smaller buildings that held the average sale prices below the 2016 average.

Overall, the breakdown is as follows:

As the gyrations continue in the oil and gas markets, the predictability of what will happen in the office market remains difficult. Vacant space is being filled which should bode well for investors. 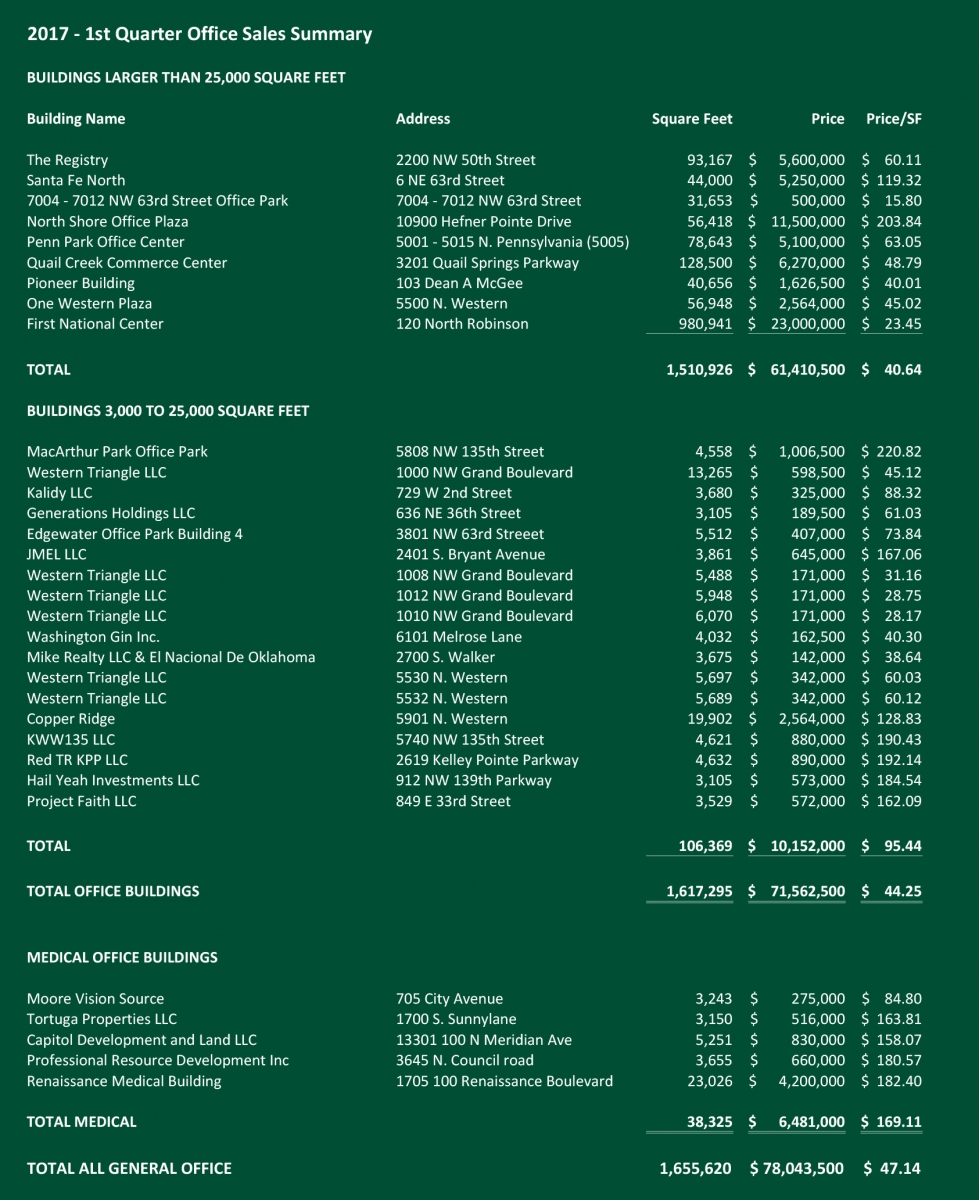 The uncertainty that characterizes the broader retail economy appears to have also affected investment sales. There were only two sales of over 25,000 square feet in the first quarter. The more significant of the two, 240 Penn Park, was purchased by RCG Ventures as part of a package that included a Colorado center. A couple of other larger properties that were being marketed, including Quail Springs Marketplace, have either been pulled off the market or are in the process of being re-packaged given the dynamics of the changing tenant landscape. As part of a countrywide trend, the larger institutional real estate firms are not buyers, resulting in an at least 100 basis point increase in capitalization rates over sales of a few years ago for class A properties. This trend opens the door for more local and regional investors to buy up in quality. Expect the current turbulence retailers are experiencing to create opportunities for these retail investors.

2017 began with more sales activity in the industrial market as compared with the 1st quarter of 2016. Overall there were 25 industrial buildings sold containing 603,274 square feet. The market-wide average price per square foot in the 1st quarter was $37.74. With the amount of transactions decreasing slightly from the fourth quarter of 2016, the overall dollar volume was substantially less at $22.7 million versus $37.2 million. Dollar volume in industrial properties is often influenced most by the average age of the buildings sold in any given quarter.

The ongoing recovery of the price of crude oil and a sustained low-vacancy rate in the industrial market has stabilized values. The overall industrial vacancy has edged up to 6.8% from a low in 2016 of 5.8% but still represents a very high occupancy market dynamic. In a market the size of Oklahoma City, a low vacancy rate translates to relatively few available space options in any given size range. 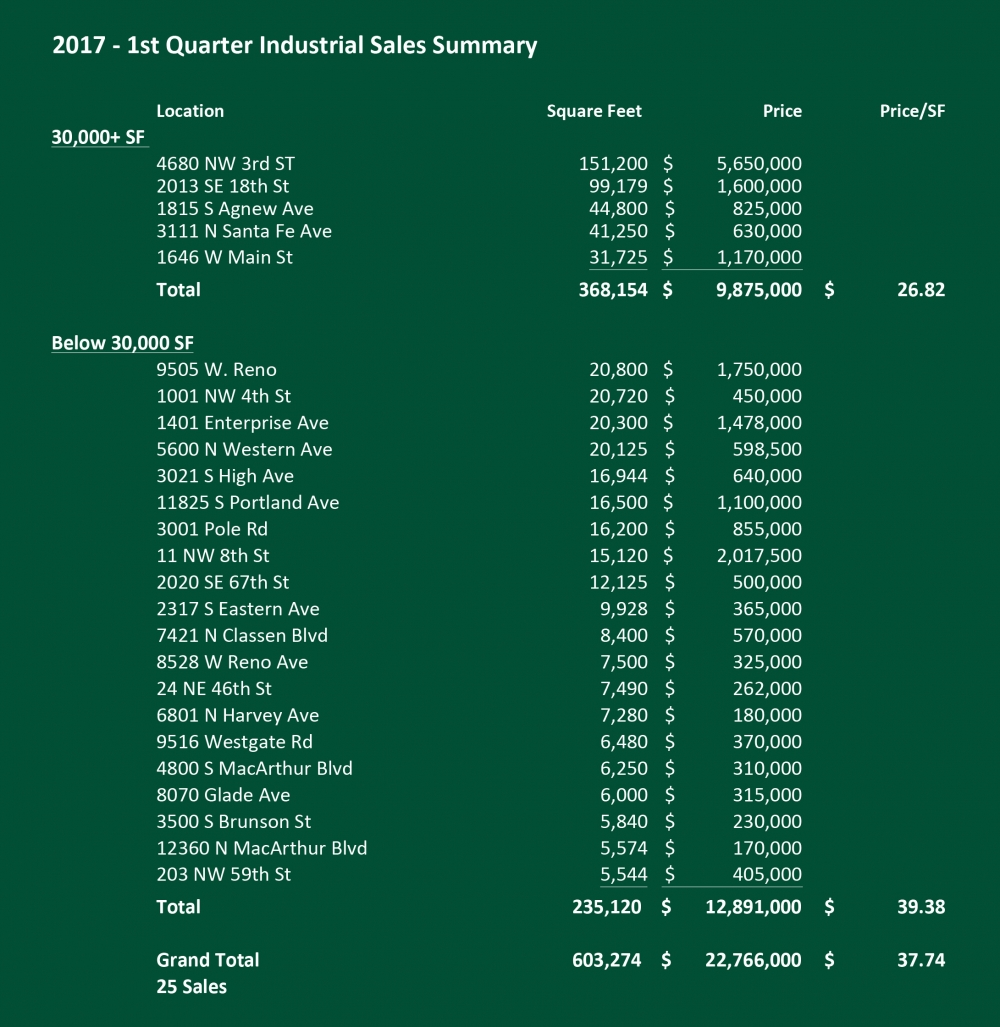 Lack of Sale Inventory Does Not Slow Multifamily Market in 2017

The first quarter of 2017 has brought falling transaction volume in the multifamily sector nationally; however, locally, Oklahoma City has continued to press forward without hesitation. Despite a lack of for-sale inventory, prices are holding steady at near record highs, and the transaction volume remains close to historical averages for first quarter transactions. Although there was a slightly negative job growth year over year of 0.3%, Oklahoma City experienced an increase in the population of 1.2% from the previous year, which is above the national population growth of 0.7% for the same period. These two factors are important indicators to watch because they are large drivers for housing demand. Another factor, specific to Oklahoma, is the oil market. Although oil prices are up 27% from the end of the first quarter in 2016, it is down slightly from the beginning of the year. Excess inventory is brought on by an increase in supply, which is a double-edged sword for our economy. While increases in drilling activity stimulate our local economy by providing well-paid jobs, the excess oil adds to the already full inventory supplies thereby putting downward pressure on the price of oil.

The federal reserve has raised the interest rates again, from 0.75 percent to 1 percent. So far there has been virtually no effects from this move, likely due to the expectation of this movement already being built into market pricing for some time. As the economy continues to improve the odds of multiple rate hikes by the Fed increase and will likely lead to higher 10-year US Treasury yields. Despite the rise in rates, multifamily investment yields remain at a premium to treasury rates, giving investors continued confidence in their capability to achieve desired returns over alternative investments. Continued increases in rates could cause this spread to diminish and shift equity into other opportunities.

For now, Oklahoma City continues to provide a robust investment market with a total of 11 multifamily properties consisting of 25 units or more trading hands in the first quarter. The $43.7 million in transaction volume were all considered Class C assets, making the average price per unit $38,351. Although this is down 33% from the previous quarter, the makeup of the transactions explains the variation. When compared to the previous quarters Class C transactions the average price per unit was up 3%, and from the previous year was up almost 14%.

While cap rates remain relatively unchanged, a lack of core assets trading will likely push the overall yields upward throughout 2017. Although cap rates remain at historic lows and prices continue to press upwards, there isn’t cause for concern of a bubble the same as in the mid-2000’s. During that time period underwriting was being done on unrealistic projections causing inflated values. Currently, most buyers are pricing acquisitions based on actual operating data and strong underlying fundamentals.

Year over year inventory grew 2.6% while only absorbing approximately 60% of the new housing units, while nationally approximately 76% of the total new inventory was absorbed. Concessions remain steady at 2.4% or $17.35 per unit per month, still slightly above the long-term average of 1.9% or $11.43 per unit per month. 2017 will come in below 2016’s total deliveries, with an additional 1,830 units scheduled to be added to the current inventory. Although well below the previous year, that’s in line with the ten year average of 1,800. The slowdown in deliveries should provide the market with the opportunity to catch up with the negative absorption experienced with the recent construction boom, and allow the market to become normalized again.

For more detailed information on the rental market, such as specific rental rates, occupancies and a further breakdown in transactions for 2016, please see our 2016 Year End Multifamily Survey.