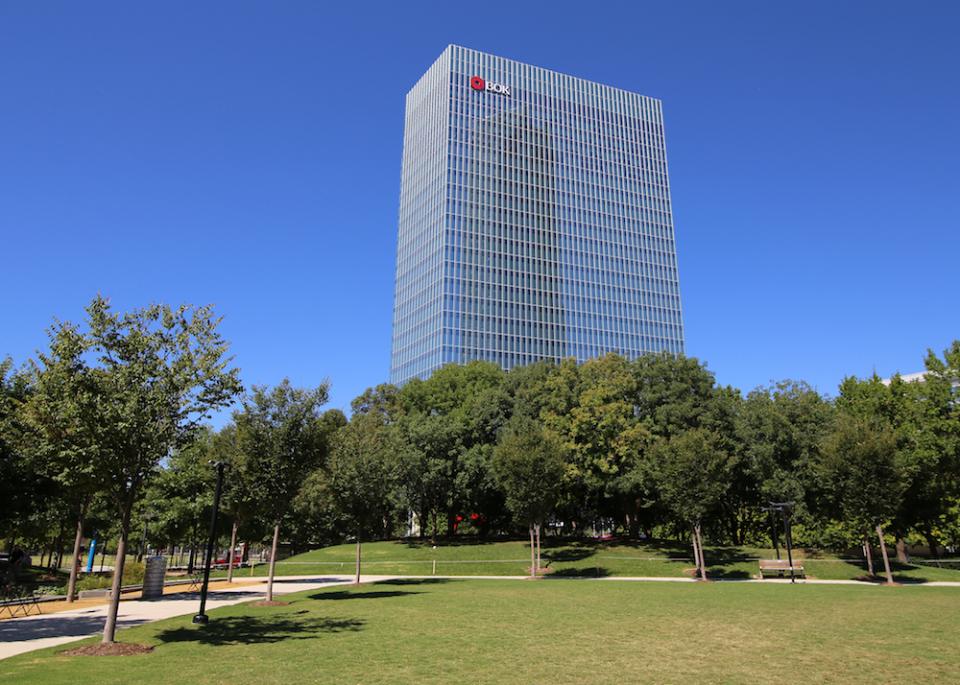 Enable Midstream Partners, LP recently signed a lease for 154,584 SF at the newly constructed BOK Park Plaza building at 499 W. Sheridan in downtown Oklahoma City. The lease is the largest in the central business district in several years. Enable will occupy six floors of the app. 690,000 SF tower which was completed in January 2018.

Enable is a publicly traded Master Limited Partnership with approximately 1,800 employees nationwide. BOK Park Plaza will serve as the corporate headquarters for the company and house approximately 500 of those employees. Enable joins Bank of Oklahoma as the first tenants in the building. Due to the size of the lease, Enable will not occupy the space until mid-2019 when construction of its space is complete, although it has already relocated its parking needs to the building’s garage.

Craig Tucker of Price Edwards & Company, in conjunction with the Houston office of CBRE, represented Enable in lease negotiations.

BancFirst has acquired the 500,000 SF, 36 story, downtown office tower at 100 N Broadway. The purchase price was $21 million. It was acquired from the Cotter estate which had placed the building in bankruptcy after the death of James Cotter in 2017.

BancFirst will initiate a major upgrade of the tower, which will include the complete renovation of the main lobby, exterior plaza area, the concourse, mechanical, electrical and plumbing systems, installation of a new roof, upgrade of elevator systems, as well as upper floor restrooms and corridors. The most critical issues began being addressed immediately upon closing. The common area work will likely start in the spring upon completion of plans and specifications.

Deer Creek Public Schools purchased approximately 68 acres of land located at NW 220th and MacArthur from Arcadia Farm, LLC. The site includes the southeast corner of the intersection and extends east to the Baptist Church and Rose Union Elementary School. Plans for the use of the land have not been finalized. The main campus for the Deer Creek School System is one mile south of the site. The sale price was $1,032,550.50. Cordell Brown, CCIM of Price Edwards & Company handled the sale.

Ascent Resources Extends and Expands to 90,000 SF in Atrium Towers

Ascent Resources, LLC recently extended its lease at Atrium Towers in Northwest Oklahoma City and expanded its premises to approximately 90,000 SF. Ascent was originally a part of American Energy Partners, who signed the original lease in 2013. Ascent’s operations are focused primarily on shale oil, liquids and natural gas exploration and production in the Utica Shale Play in Ohio’s Appalachian Basin.