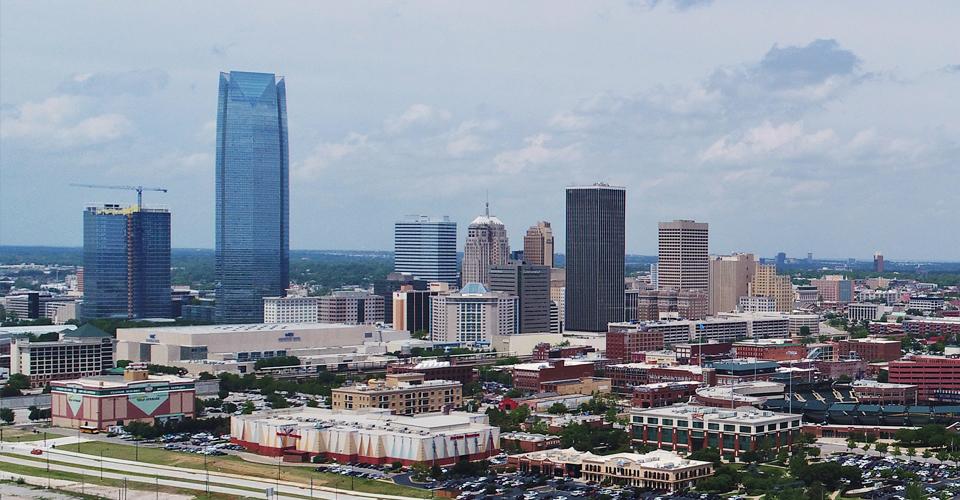 The Oklahoma City office market saw solid activity in the 2nd quarter of the year. While the total number of transactions was somewhat lower than previous quarters, the average price per square foot on high quality assets is moving steadily north of $100 per square foot. It should also be noted that the sale of many Class “C” buildings are being purchased for renovation and upgrades which will move them to a higher level of value.

In the Second Quarter of 2018 we saw the sale of three buildings in excess of 25,000 square feet. The downtown Parkside building was sold by Sandridge Energy to other local energy firms which will occupy space in the building. The Harvey Parkway building in north OKC was sold to a pension fund, the Teachers Retirement System of Oklahoma. It will occupy space in the building, although the property will continue to also be marketed to third party tenants.

The third sale was the Park Auto Plaza on Dean McGee which will be renovated and marketed to tenants. Eleven buildings of less than 25,000 square feet sold during the quarter. We typically see a greater number of sales per quarter in this smaller size building. This reduced number of sales could be emblematic of a slight slow down or just an anomaly.

The second half of 2018 should see the closing of the Cotter Tower office building in the CBD, along with the sale of the adjacent Santa Fe Garage. These transactions are very positive for downtown OKC in that they solidify the long term presence of both BancFirst and Continental Resources, and allow for a complete renovation of the 500,000 square foot office building which had fallen into a severe state of disrepair. 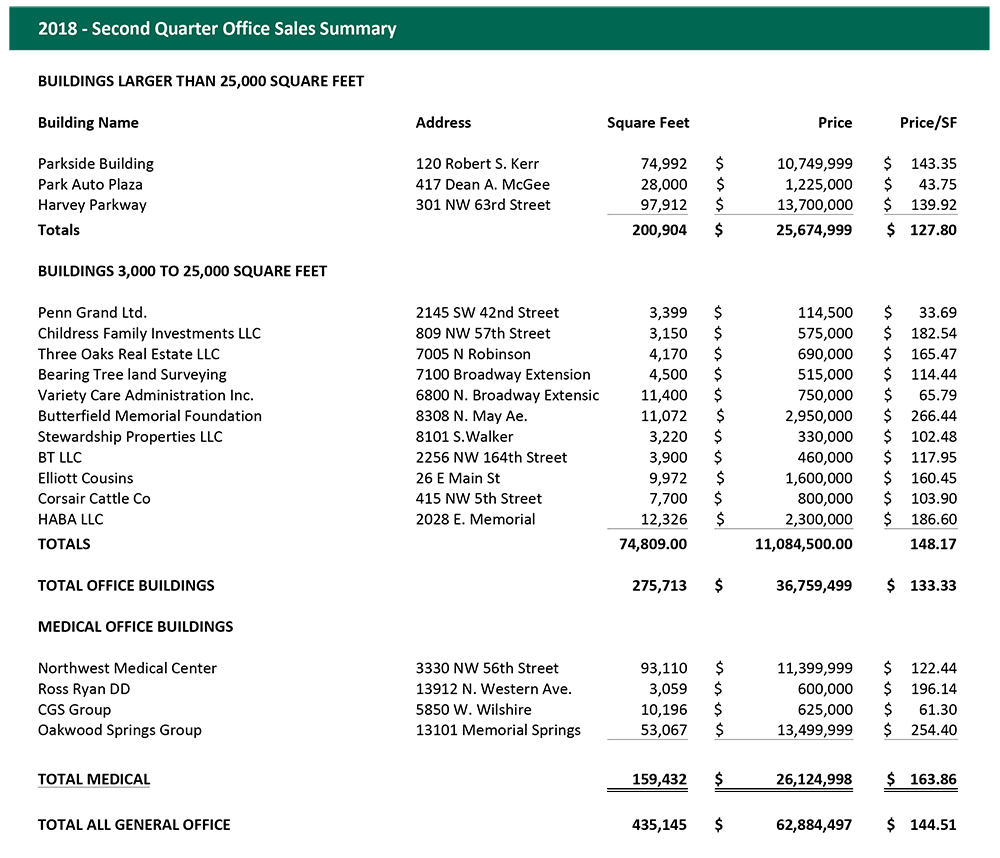 There were no sales of retail properties over 25,000 square fee in the second quarter, although a number of properties are being marketed such as Rockwell Plaza and Casady Square. Parkway in Norman is expected to be marketed later in the year. And, there are a few off-the-market deals that could happen. Yet, overall activity remains slow compared to historic levels. We reviewed sales for the first half of the year in our recently completed market survey, here's an excerpt: Oklahoma’s premium retail properties have typically been in the hands of national institutional investors. Most have sold their Oklahoma holdings in recent years, a trend that continued in the first half of 2018 with the sale of Quail Springs Marketplace and Bryant Square Shopping Center by JP Morgan and Inventrust, respectively. More sophisticated investors such as these were originally drawn to this market because they saw our market as an up and coming market that they could buy-in to at a higher capitalization rate than their traditional markets and therefore generate higher returns. Their exodus has been driven by a number of factors. In some cases, the lifecycle of the investment necessitated a return of funds to investors. Others did not see the higher returns initially envisioned. But, the greater influence was no doubt the disruption in the national retail market and a desire by institutions to exit secondary markets and return to their core markets.When institutions make the decision to leave, they tend to do so at current market values regardless of their investment basis. In the case of these two recent sales, Quail Springs Marketplace sold for less than JP Morgan paid for it in 2005; and, Bryant Square sold for less than Inventrust had spent buying and upgrading the center. During this time period, capitalization rates on class A centers have been rising - partially due to the lack of institutional investors, partially due to the uncertainty in the retail market, and, more recently, due to the rise in interest rates. Institutional investors will come back when retail stabilizes, but for now, prices have come down and opened the door for more local and regional buyers.

The Second Quarter of 2018 is continuing on an upward trajectory for the industrial market as compared with the 1st quarter of 2018. Overall there were 21 industrial transactions containing 1,081,302 square feet. The market-wide average price per square foot in the 2nd quarter was $44.99. Twenty-one sales transactions generated $48,651,442 of total dollar volume. The industrial vacancy continues to tighten from the previous quarter, it is a reflection of a steady market dynamic which has stabilized, what can be a highly volatile industrial market with an ever present correlation between Oklahoma City’s economy and the states oil and gas production. A recent search in our market for buildings to purchase with 5 or more acres and overhead bridge cranes returned ZERO results. This will force end users to purchase land to build their new facility. 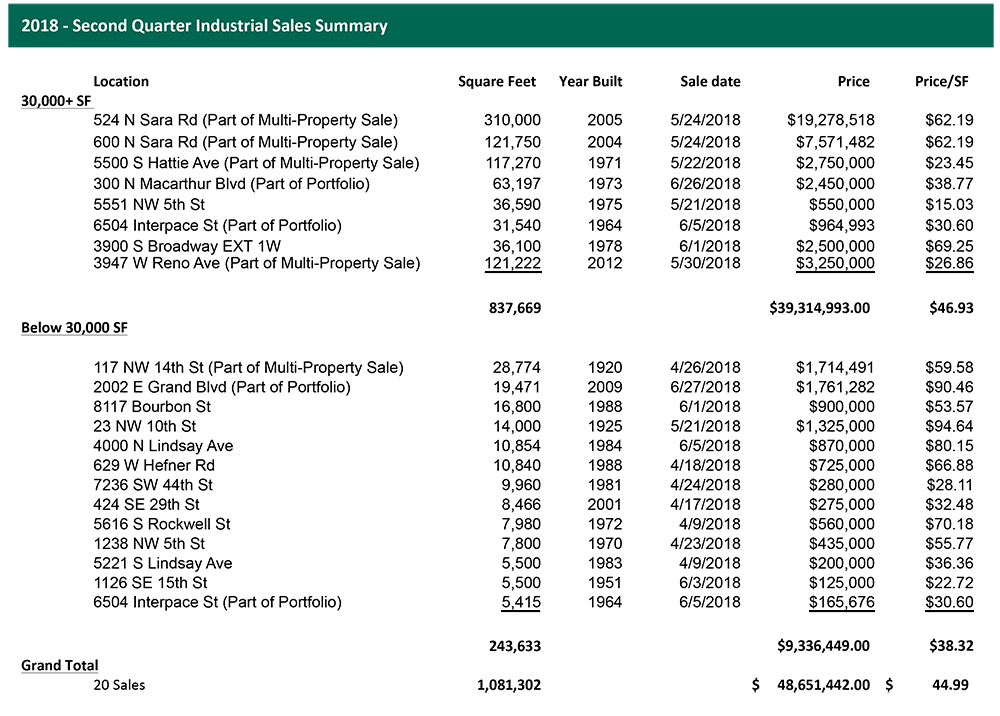 In the second quarter of 2018, the Oklahoma City multifamily market experienced another strong quarter in terms of overall sales. Thirteen properties consisting of twenty-five units or more traded for a total sales volume of just under one hundred million dollars. Although it represents a decline in 29% from the previous quarters total units, the previous quarter was the second all-time highest quarter for total units sold. Down at 2,183 units, the second quarter of this year still comes in at the eighth highest total units sold with an average price of just over $45,000 per unit and the tenth consecutive quarter to have over one thousand units sold. Year to date there have been over 5,200 units sold with an average price per unit of $40,000, relatively flat from the same time period the previous year. Year to date, the sales volume is up 8% with a total of $210 million in sales and is expected to remain relatively healthy through the end of the year. This is the second highest mid-year sales volume ever, only behind that of 2012 when it reached $220 million, and far surpassing the last expansion in 2007 which was a mere $173 million, a healthy number at the time. Although YTD we are the second highest sales volume, we are the highest historical mid-year for total units sold, with 2007 in a close second only 232 units less.

We are in somewhat of unknown territory because while the underlying feeling is things should be slowing down, they’re not. The main reason sentiment says things should be slowing down is due to the length of the expansion as well as the record high pricing; however, with the current economic conditions this could just be the new normal and in fact “market value”. We have a healthy economy with locally unemployment being at a very low 3.6%, and even nationally only at 4.1%. For a third month in a row, there were more job openings in June 2018 than unemployed people, reflecting a “robust jobs market” according to USA Today. This is making it very difficult for businesses to grow, but means the economy is moving along very well. Even with rising interest rates transaction activity hasn’t slowed down. The overall assumption has always been that when interest rates rise the cost of debt increases causing the weighted cost of capital to also increase and in turn cap rates must rise too. That has not proven to be the case, yet. So far, the cost of capital hasn’t had as much of an impact as the amount of capital flowing into the real estate market, especially into the multifamily housing market.

For now, the market continues to appear strong and for the short term will likely remain so. The only restraint for a buyer at this point is finding an asset that hasn’t traded recently and experienced that large increase in value, although some are sill pushing that envelope further with higher and higher price tags. It wasn’t too long ago that Class C properties started to consistently break the $30,000 per unit ceiling and now it’s not uncommon to see those same properties trade regularly for above $50,000 per unit. While rents have not increased exponentially, it’s the compressed cap rates and the willingness of buyers to accept a lower yield that has driven the values to these levels. Regardless, they don’t appear to be slowing down and although some buyers say they have been priced out, there are a handful behind them anxious to jump in.

One of the few things that could apply slight resistance to the growth is obtaining acceptable financing. While agency lending made up two thirds of multifamily lending in 2017, Oklahoma still relies heavily on local bank financing for bridging the gap on assets that may not qualify for the agency rules. Those “bridge” loans are becoming a little more difficult as local banks are starting to have memories of the past and looking at their books and realizing they are a little heavier than they would like in multifamily. For out of state buyers with a strong track record, it’s difficult to find a bank willing to take the chance on a subpar asset.

On the ownership side, operations have remained strong, although there has been a slight increase in vacancy rates from the previous quarter, but still hovering right around 90% overall. In the past twelve months we have kept up with absorption; however, the new deliveries of just over 1,400 units combined with the slight vacancy increase could cause a little slowdown in new lease up activity but should only impact the short term as deliveries going forward continue to slow down with under 1,000 units planned to start in the next six months. Rent growth has remined in-line with historical averages hovering between two to three percent based on asset class.

Going forward, we remain optimistic that in the short-term transaction activity will continue at close to the current pace. Interest rates are likely to continue to rise, but until demand slows down cap rates are not likely to change in any significant direction. Looking out 12 to 24 months, we do expect to see some form of leveling off for the multifamily market, but do not expect it to be nearly as corrective as ten years ago. 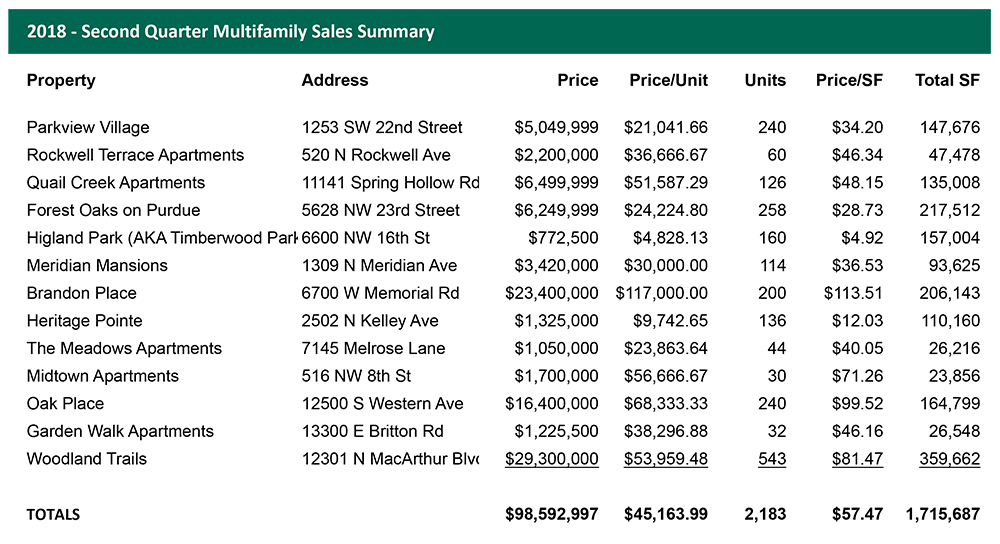